(7/20/21) -We have talked for some time about opportunities for a change to the unfair laws under Social Security for our public pensioners. We believe the best opportunity for a change is NOW, and we are asking all of our members to act and to be a part of this change. The Ohio Pension System Directors have jointly penned a letter regarding the Windfall Elimination Provisions impact for their collective members. Read this letter “here” 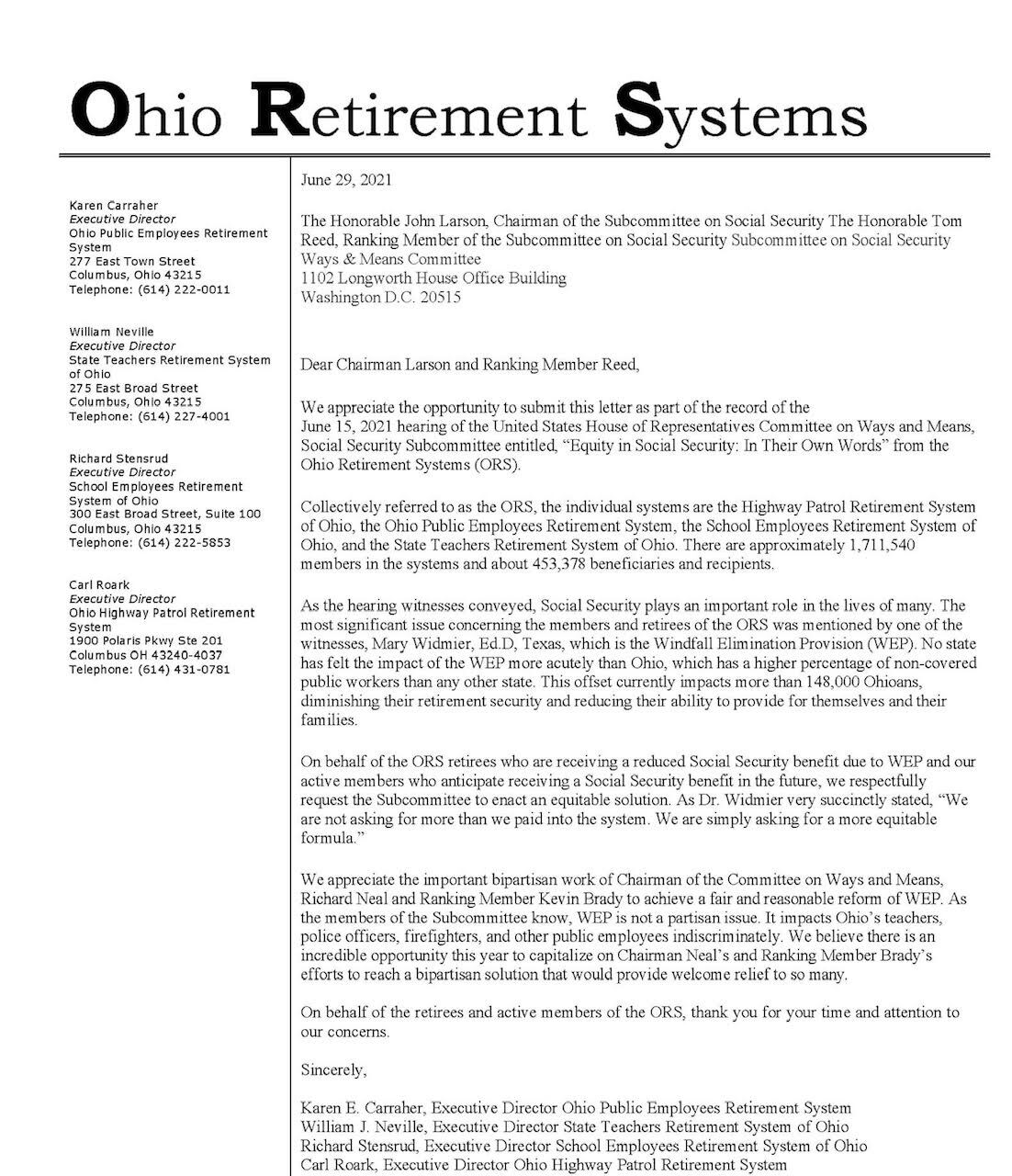 SERO has joined the “Public Retirees Alliance” to affect changes to the Social Security Windfall Elimination Provision (WEP).  Testimony was heard during the “Ways and Means Social Security Hearing entitled “Equity in Social Security: In their own words”.

Once you have reviewed these items, please send your personal story or ask for them to help with this issue to your legislator.  To locate your U.S. Senator and Representative you may visit our “SERO home page” follow the prompts to contact your Congressional Representatives.  Make sure our own Ohio Congressional contacts hear from you as well.   Please let us know the response you get from your legislators.  WE CAN DO THIS!!

PENSION BENEFITS AT RISK WITHOUT COLA CHANGES
(5/16/17) - As Chair of the SERS Board of Trustees and an active member of OAPSE, I want to let you know the importance of the proposed Cost-of-Living Adjustment (COLA) changes to SERS.

Protecting Pension Benefits Is Our Priority!
The SERS Board is sworn to protect the pension benefits of active and retired members.

The changes fairly ask active members and retirees to share in the pension funding solution, rather than saddling active members with the entire burden.

Ignoring the Problem Now Makes It Worse Later
SERS must address its financial challenges now. The pension fund may not withstand another serious financial crisis. The healthcare fund has seven years of funding, and cannot survive without a healthy pension fund. Despite this urgency, members are being asked to oppose these changes.

A FAIR Solution
We know these changes are difficult. Several of our advocacy group partners have provided letters of support or understanding that the COLA changes are a FAIR and NECESSARY solution.

We Need to Hear from You
If you agree that it is better to make changes now rather than waiting for the funding problem to get worse, let the SERS Board hear your voice.

CLICK HERE to tell the SERS Board, "Yes, preserve my pension and access to SERS' health care!"

July 14, 2016– Updates for H.R. 711 “Equal Treatment for Public Servants Act”
H.R. 711 received a major setback on Wednesday, July 13, 2016. Rather than a vote to move the bill out of the Ways and Means Committee, it was postponed indefinitely. Due to opposition from some public worker organizations we now are back to square one to try and get the support needed from legislators (and these opposition groups) to move the bill forward. Modifications and concessions were made to the bill in an effort for those opposing to come on board but they did not agree. Some in opposition to the bill are calling for a full repeal rather than working to get some benefits now. Many public employees are losing hundreds of dollars each month we do nothing on this bill. It is a sad day for all of our School Employees who have written letters and made calls to see this great opportunity slip away at this time. That does not mean we stop or sit back. We still have a window of opportunity to get this bill back up for approval when legislators come back from Summer break. Lets start working in our local areas and get all of Ohio’s representatives on board. SERO will work diligently on any and all efforts to bring this bill up for a vote this year yet!

July 12, 2016– CALL TO ACTION: Updates for H.R. 711
“Equal Treatment for Public Servants Act” A vote has just been scheduled for this bill on Wednesday, July 13, 2016 at 2 pm. For those who may need a quick brief on the bill, H.R. 711 would repeal the current Windfall Elimination Provision (WEP) and will insert a proportional formula that calculates benefits using a public servant’s actual earnings history so that all workers are treated fairly. Ohio currently has 11 representatives who have signed on in support of H.R. 711. We need all Ohio representatives to sign on to support H.R. 711. Please contact your local representative and thank them if they are already supporting and ask them to sign on if they have not already done so.

May 31, 2016– H.R. 711 Update
There has been no legislative action on H.R. 711 since the March hearing, however, the bill now has over 80 co-sponsors representing 24 states. Texas has the most co-sponsors with 24 and Ohio is next with 11. Those co-sponsors include Beatty, Chabot, Gibbs, Johnson, Joyce, Latta, Renacci, Ryan, Stivers, Tiberi and just recently Turner. Presently there has been no Senate activity on the bill so Chairman Brady is looking at options for this bills hopeful movement forward and eventual passage. For those who have representatives in their districts who have not signed on to support H.R. 711, call them as ask that they support it now!

March 23, 2016- Update on HR 711 hearing (3-22-2016). We are pleased to say that the hearing on the Windfall Elimination Provision or “WEP”, was a very positive one. We understand that there is a similar provision regarding this issue in the President’s budget bill but it would not take effect until 2027. We support the Brady/Neal bill (HR 711) as it plans to begin implementation on Jan. 1, 2017.  Tim Lee, the Executive Director of Texas Retired Teacher Association was present and did a great job of explaining that the “WEP” has long stood as a barrier for public servants in receiving the retirement benefits that they earned through working in other professions that paid into Social Security. Tim expressed the need for passage of this bill for those workers earlier rather than later. In other testimony from Jason Fichtner, a senior research fellow at George Mason University, stated simply that “Justice delayed is Justice denied”. We are hopeful the next hearing will be announced soon so this bill may be voted for passage. More to come…….

March 16, 2016- (H.R. 711) “The Equal Treatment for Public Servants Act” REQUEST FROM SERO and SERS MEMBERS – We are seeking real-life stories from members on how the Social Security Windfall Elimination Provision (WEP) has impacted their lives and retirement. Please respond to either SERO offices at 614-431-0387 or ask for Laurel Johnson at SERS at 614-222-5853. This is important to show legislators how this bill negatively impacts our retirees. We are counting on you for your help and input.

March 15, 2016- (H.R. 711) “The Equal Treatment for Public Servants Act”. We are now starting the efforts with our legislators. This is the time for your voices to be heard on this bill. Efforts are underway to get the hearing for this all-important bill for our retirees. Please click to see the latest AARP and Organizational endorsement letters regarding H.R. 711.

THIS JUST IN! A hearing is scheduled on H.R. 711. Click on link for the hearing announcement. http://waysandmeans.house.gov/event/chairman-johnson-announces-hearing-on-social-security-and-public-servants-ensuring-equal-treatment/

October 16, 2015– “AMERICAN WORKER HEALTH CARE TAX RELIEF ACT OF 2015”Introduced in the Senate by Ohio Senator Sherrod Brown on September 24, 2015, Senate Bill 2075 amends the Internal Revenue Code to repeal for taxable years after Dec. 31, 2017, the excise tax on employer-sponsored health care coverage for which there is an excess benefit. (High-Cost Plans) This excise tax, commonly referred to as the “Cadillac Tax” could cause many plans to increase their premiums substantially.

October 14, 2015– “PROTECTING MEDICARE BENEFICIARIES ACT OF 2015” Please review letter of thanks from SERS Executive Director, Lisa Morris to Senator Sherrod Brown on his efforts to assist retirees who would be affected by this increase.
CLICK HERE to see the Senate Bill Protecting Medicare Beneficiaries Act of 2015

August 5, 2015–Thank you, Representative Bill Johnson for co-sponsoring H.R. 711, the Equal Treatment of Public Servants Act. H.R. 711 now has 38 cosponsors, five from Ohio. If passed, the bill would repeal the current calculation for Social Security’s Windfall Elimination Provision and replace it with a more fair calculation.

June 26, 2015–LEGISLATIVE UPDATE: OHIO CO-SPONSORS for the Windfall Elimination Provision (WEP) H.R. 711
Rep. Patrick Tiberi (District 12), Rep. Steve Stivers (District 15), Rep. Joyce Beatty (District 3) and Rep. James Renacci (District 16) have all signed on in support of the bill. Please contact your representative and ask for their support of H.R. 711. If your representative is one listed above, please let them know you appreciate their support!! 2015 Congressional contact information. CLICK HERE to review.

January 15, 2015–The latest news on Windfall Elimination Provision (WEP) legislation for 2015 is an introduction date for end of January or early February. Watch for title “Equal Treatment of Public Servants Act”.

December 15, 2014–To view our letters to Representative’s Kevin Brady (R-TX) and Richard Neal (D-MA) on our support for “The Equal Treatment of Public Servants Act”. Please click on these links- SERO_Honorable_Brady_Letter and SERO_Honorable_Neal_Letter

November 21, 2014–Just announced – Nov. 14, 2014, “The Equal Treatment of Public Servants Act” Introduced by Rep. Kevin Brady (TX) and Rep. Richard Neal (MA)
This bill, click for key points will repeal the current Windfall Elimination Provision (WEP) and would instead create a fair formula that will give our public employees the same treatment as for all other workers in America. This bill has bi-partisan support. This bill will allow our School Employee Retirees to receive the Social Security benefit that they earned based on their actual Social Security contributions and work history. We will be updating you on the progress of this bill for 2015 as we expect to see early movement in the legislature. We urge you to send a letter of support to your Congressional representative today! Here is a contact listing for our Ohio United States Senators and Representatives- 2015 Ohio Congressional District Listing. If you are unsure of who your representative may be, please call 1-202-224-3121 to confirm your current representative. If you wish to submit an automatic letter to your representative, please CLICK HERE and you will be directed to a form on SERS website.

– Currently, the Ohio Retirement Study Council (ORSC) has just hired a firm to review the recommendations made by the Ohio Pension Systems to ensure their funding status is within statutory guidelines. After significant time has elapsed since those recommendations were made, this firm is holding initial interviews with pension administrators as well as Council members. The firm has already isolated some majority opinions from the council with regard to health care funding, ensuring benefit changes are gradual and of course no increases in contribution rates. Some council members have requested the firm to come up with some innovative and aggressive ideas about changes without concern regarding politics. We are glad that a comment was heard with regard to recognizing the unique members and retirees within each pension system. Initial reports will be done on our system, Ohio School Employees Retirement System first as they are better funded and will require fewer changes to meet the statutory 30-year funding requirements.

Senate Bill 3 – This is the Senate version or companion bill for H.B. 69 and is on pension funding reform. This bill will most likely be merged into the house bill (69) for one pension funding bill.

Senate Bill 5 – SERO does not support this legislation as it was introduced. Please SERO letter below with regard to S.B. 5. Update: Senate Bill 5 opposition has presented enough signatures for this issue to be placed on the ballot for the voters to decide its outcome.

Update: (Federal) H.R. 235 has been introduced and has many sponsors to date. Please contact your Congressperson and tell them you want them to hold hearings on this important bill. A companion bill in the Senate has also been introduced. To see a letter that was submitted to the Committee in charge of this legislation, please click on link below: